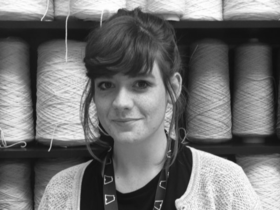 Aylson Stewart’s role as Front of House Assistant at Dovecot Studios has allowed her to gain an outlook of Edinburgh’s vast creative industry firsthand. Fostering creativity and innovation, Dovecot Studios is a leading centre for contemporary textiles, producing innovative commissioned works and curated displays. Working with international artists from all disciplines to produce contemporary works, and with an exciting programme of exhibitions and events, Dovecot brings together artists and audiences to showcase contemporary textiles on a world stage.

Do you think the production of popular films and TV shows has had much impact on the number of tourists attracted to Edinburgh?

I do think film and television does have a huge impact, you just need to look at the ‘Outlander Effect’ as an example. An article from The Scotsman noted that Historic Environment Scotland had a 20% average increase in footfall at its 70 sites across Scotland between April and September last year, including Doune Castle – the fictional Castle Leoch in the series – with a 42% increase. Historic Scotland paid-for attractions – including the monolithic Edinburgh Castle – recorded their best season ever in 2017, these are figures that cannot be ignored.

Edinburgh is the world’s leading festival city, what makes Edinburgh such a fantastic place to host a vast variety of festivals?

I think that its Edinburgh’s size that makes it work for such a variety of festivals; so many things happen one on top of the other it encourages ideas to happen. It also means people can see lot in a short distance; you can see a cabaret show, then some comedy, stop off for a bite to eat and end at the opera – all within a mile! Where else can you say that?

How do you ensure the creative industry continues to appeal to future generations?

Dovecot studios takes visitors on a historical journey, exploring tapestries and their unique hand crafted technique that embodies technique, creativity and discipline. Dovecot provides a platform for tapestry to be discovered and to educate visitors on the skill and creative possibilities it offers as a tactile medium. The importance of Dovecot providing a space to nurture craft is essential in preserving the art of weaving and the future possibilities it can create for the next generation.

I think that while we may be used to seeing traditional Scottish performances ourselves, we need to appreciate the spectacle that we have on our door step. Seeing – and quite frankly hearing – a piper is quite an arresting experience, never mind a whole pipe band. It is easy to forget that, to a visitor, this is a novel experience and is completely on a par with other international performances.

I think that the universities are incredibly important in creating talent within Scotland, and the Art Schools too. Some of these institutions are the highest ranking in the world. It is no surprise that Scotland has 5 different Turner Prize winners in its midst, which for a small nation I think that is impressive.