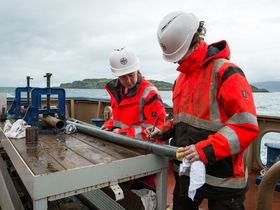 Please tell us about British Geological Survey and how it contributes to the marine sector.

The British Geological Survey (BGS) is the oldest geological survey in the world, and carries out a range of activities which provide expert, impartial, and innovative advice regarding the geology of the UK and beyond. In terms of the marine sector, the BGS is involved in: mapping and understanding the seabed and subsurface; carrying out its own surveys of the nearshore using our vessel, the White Ribbon; building and using offshore drilling equipment to retrieve samples from the subsurface; research focusing on the potential for carbon capture and storage offshore; research to understand the offshore subsurface and suitability for the siting of renewable windfarms; understanding potential for responsible deep water mineral exploration; and assessing and understanding offshore oil and gas potential.

I lead a group of ten in the Petroleum Geoscience team, and we work closely with colleagues across the BGS Energy and Marine directorates. The Petroleum Geoscience team carries out a significant amount of work for external clients, including the UK, Falklands and Isle of Man Governments, as well as working with other international geological surveys. We provide expert geological advice on how oil and gas systems work, and carry out research into better understanding their geological evolution. In my role as team leader, I am responsible for developing our current and future work, both in the UK and worldwide, as well as managing staff and projects. As a petroleum geologist, I have mostly worked on collaborative studies with partners from northwest Europe, to extend our understanding of geological systems across borders. My research background is in offshore glacial geology, and I work with the marine team to interpret relatively shallow geology and assess its suitability for the siting of wind turbines, as well as furthering understanding of how past ice sheets behaved.

How has your career led you to where you are today?

I originally went to university to study astrophysics, but soon realized I was out of my depth regarding mathematical ability! Having switched to physical geography, I then went on to do an MSc and PhD. During my PhD, I studied valleys that formed beneath ice sheets during the last glacial periods using 3D seismic data to image beneath the North Sea. From there, I went on to work for an oil and gas consultancy company before joining in the BGS in 2011. In 2017, I took on the role of team leader for the Petroleum Geoscience team.

The marine team at British Geological Survey studies a range of marine environments. What are the main challenges facing the marine sector?

I feel that the main challenges facing the marine sector include increased pressure from the development of infrastructure and extraction of resources, and a relative lack of ‘joined up thinking’ regarding the surface and subsurface.

Please tell us about a research project you have been involved in recently or are working on currently.

I am currently working with scientists from the geological survey/energy research group (TNO) in the Netherlands to better understand the Carboniferous rocks of the North Sea. These rocks were deposited more than 320 million years ago in hot, wet, swampy environmental conditions. The Carboniferous rocks are buried deep offshore in the North Sea, and form important sources of oil and gas in the UK and Dutch sectors. The same rocks are found in cliffs in northeast England and southeast Scotland around Berwick on Tweed, which we sampled this summer to find out more about their age and composition.