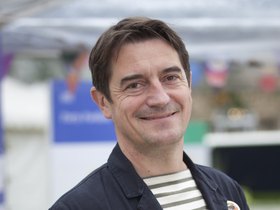 Nick Barley, Director at Edinburgh International Book Festival since 2009, is very active within Edinburgh’s vast and imaginative arts world. The Edinburgh International Book Festival was founded in 1983 and has been celebrated annually since 1997. Now regarded as the largest and most dynamic festival of its kind in the world, the Book Festival includes over 800 events featuring more than 1000 authors, illustrators, thinkers and musicians each year – offering something for everyone. Innovations during Nick’s directorship include Unbound, a free evening mini-festival of literary performances and the 2012 Edinburgh World Writers’ Conference which took place in 17 cities worldwide.

Since Edinburgh became the world's first UNESCO City of Literature in 2004, the city has really come to appreciate that culture, writing and ideas are central to the city’s identity. During that same period the city’s world-beating festivals, including the Book Festival, have gone from strength to strength. In recent years the city has established itself a cultural city all year round, from vibrant grassroots arts activity right through to headline-grabbing concerts, exhibitions and events.

Edinburgh is known globally for its booming cultural and creative network, why is Edinburgh so iconic when it comes to the creative industries?

The spirit of the Scottish Enlightenment burns brightly in Edinburgh and perhaps that’s why a host of internationally-renowned writers and thinkers live in the city. Edinburgh’s spectacular setting offers the perfect place for people to congregate, but it’s also a compact city where people can come together to talk, share ideas and perform. From the vibrant Shore area in Leith to the buzzing late-night haunts around the Old Town, it’s a city that’s perfectly placed to nurture creativity.

Do you think the production of popular films and TV shows has had much impact on the number of tourists attracted to Edinburgh?

Thanks to its location on the northern edge of Europe, Edinburgh is a place of deep winter darkness as well as long, light summer nights. This, along with the dark underworld beneath the streets of the Old Town, has contributed to a kind of split personality in the city: light and dark; good and evil. And it has contributed to some of the city’s greatest stories, such as Robert Louis Stevenson’s novel The Strange Case of Dr Jekyll and Mr Hyde. The city’s ‘dark’ side has also fueled the explosion of successful crime writing by international stars such as Ian Rankin and Val McDermid, and by Irvine Welsh in his novel and subsequent film Trainspotting. These books (and the films that they have spawned) have brought countless thousands of tourists to the city.

What is your favourite film or TV show to have been filmed and/or set in Edinburgh?

In her centenary year, the only person I could possibly name in answer to this question is Muriel Spark, and her wonderful novel The Prime of Miss Jean Brodie. Naturally, it was made into a hugely successful film.

Universities play a significant role in producing talent - in particular the Book Festival has a longstanding relationship with the University of Edinburgh. At the moment, the Book Festival is working closely with Edinburgh College of Art’s third year illustration students as part of our ReimagiNation Festival. The students have been tasked with creating work around Glenrothes public art and last week, visited P7 pupils from St Pauls RC Primary school to create artworks with them. Our 2017 Festival also saw the Book Festival and University of Edinburgh work closely together to create a free online course which took readers on an insightful journey giving them the tools to appreciate works of fiction, and examine what makes a good novel.

Does the ever increasing digitization have much effect on the creative industries?

The adoption of connected digital technologies has undoubtedly brought great opportunities and touched every industry not only in Edinburgh but globally. But this has not had a negative impact on traditional media: the Book Festival’s independent bookshop has continued to see a steady annual increase in sales of physical books.

What’s your favourite creative event to attend anywhere in the world?

I’m privileged to have had the opportunity to attend literary festivals all over the world and it would be impossible for me to name a favourite one. My most recent trip was to the FLUPP Festival in Brazil which celebrates literature in Rio de Janeiro's favela communities. This year's event brought together acclaimed authors, musicians, filmmakers and artists in the city’s Vidigal community – a poor neighbourhood which overlooks Ipanema beach.