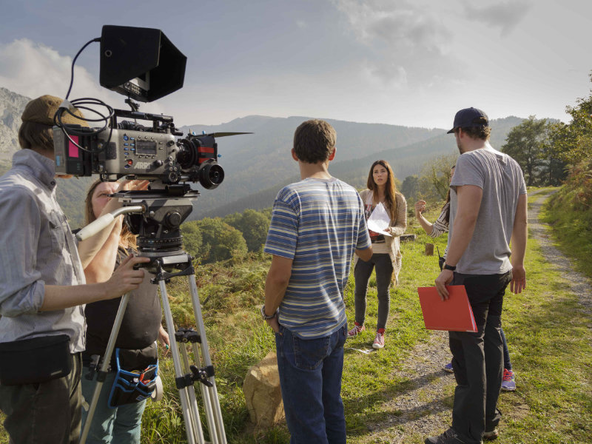 Screen Academy graduates can be found working across the film and television industry and at film festivals around the world, winning awards and developing their careers.

"The Screen Academy’s strong links with the film and TV Industry ensures we can provide informed support and guidance to our students as they work towards a professional career. Supporting them to build their own professional contacts, knowledge and experience, creates confident and work ready graduates.This enables them to better establish themselves as successful working practitioners."

"I wouldn’t be where I am now if it wasn’t for the MA Film course at Screen Academy Scotland. Through contacts I made whilst studying, I have been able to pursue a career as an Assistant Director. The MA Film course allows you to collaborate with other filmmakers in Scotland and therefore you can leave the course being part of the local filmmaking community.

"I recommend the MA Film course to anyone seeking a career in Film and TV. I learned that the most important thing is to be pro-active, make contacts and open yourself up to new experiences within filmmaking. The more you know the more you can be of use on a shoot"

Ben’s debut feature film Pikadero premiered at San Sebastian International Film Festival in 2015. Pikadero went on to screen at over 40 international film festivals, winning multiple awards including the Michael Powell Award for Best British Feature at Edinburgh International Film Festival, the FIPRESCI Award and Best Film in Kiev, the Critic’s Choice Award in Zurich and the Cineuropa Award in Brussels. The film gained further recognition from the Spanish Film Academy as an outstanding contribution to Spanish independent cinema and received theatrical distribution in a number of European countries.

"Since graduating Igua worked on Sigma films Boyz in the Wood and has since gone on to work on Grandpa's Great Escape, on Outlander and on reshoots of Ordeal by Innocence. She continues to work with crew she met on BITW and GGE while also making new contacts. She is now establishing herself in the industry and continues to shoot student and small projects in her free time."

"Whilst studying at Screen Academy Scotland, Kiana was mentored by Louise Scott, the Director of media co-op. After graduating, Kiana started an internship with media co-op and make a short hip-hop protest film, Tax on Me, which premiered in August 2017, followed by a screening at Scottish Queer International Film Festival. Kiana was also nominated as one of the #30under30 inspirational women in Scotland 2017.

“During my time at Screen Academy Scotland, I had three of my short scripts produced by fellow students, bringing my work to life and giving me a glimpse into the dynamic of production.

"Screen Academy Scotland was the exact kind of small batch, hands on experience I needed. A variety of tutors helped me discern my own voice and tactics needed for writing. Festival opportunities gave me a chance to flex my networking muscles and see how those in film collaborate in real time.”