Edinburgh’s appearance in the Avengers: Infinity War (fourth highest grossing film of all time) - one of the biggest movie franchises of all time – was an opportunity like no other. With the addition of VFX, the nineteenth film in the Marvel Cinematic Universe featured Edinburgh’s versatility with its breathtaking array of architecture dating from the medieval to the contemporary. 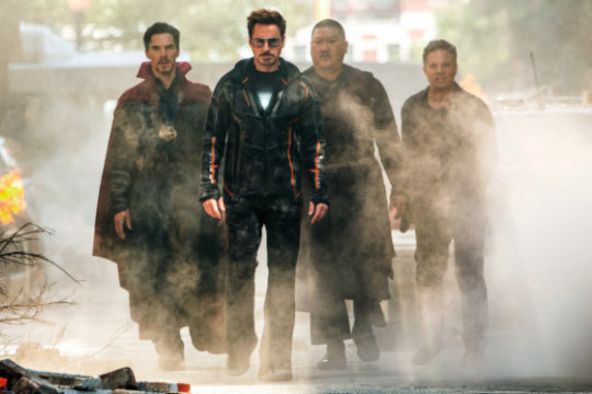 As the only location outside the studio to be used in this film, you could say Edinburgh, itself, was its own star of this blockbuster hit and was the largest, most complex shoot ever to film in Edinburgh's historic Old Town and City Centre.

“The filmmakers were looking for something unique, gothic and dramatic and Edinburgh’s Old Town with its medieval architecture fitted the bill. They were also looking for something they hadn’t seen in blockbusters of this scale, and while the city is accustomed to filming, Avengers: Infinity War is the first production of this huge scale and truly global reach to choose Edinburgh. It was a very exciting prospect, and one I’m pleased to say the city embraced wholeheartedly.” – Rosie Ellison, Manager at Film Edinburgh

The production saw over 400 crew members working on the shoot, following three months of pre-production and several months of preparation in advance of this, working closely with Film Edinburgh and the City of Edinburgh Council.

Waverley Station was transformed through CGI and special effects for the epic battle between Scarlett Johannsson’s Black Widow, Chris Evans’ Captain America and Anthony Mackie’s Falcon tackling the Black Order assassins. In fact, commentary from Victoria Alonso (Executive Producer) reveals just how much of the film is CGI with over 2,900 VFX shots in total.

See the locations for real with the help of This Is Edinburgh’s handy Guide and Map.

“Infinity War shot to number one position in the league table of opening weekends and within weeks had earned over $2 billion USD worldwide at the box office. The largest cinema audiences were in the US which spent nearly $700 million at the box office; China, which made nearly $200 million (population size helps), followed by the UK which spent $41.5 million on seeing the film in the cinema.” – Film Edinburgh

In total the production generated an estimated £10 million plus for the city region in economic impact.

So why not make it Edinburgh and host your next business event in a city where film Legends have walked the streets and iconic locations graced the Holywood screen. Find out how we can make your next event come to life here.

Find out more from Film Edinburgh.