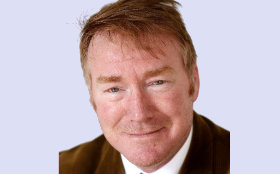 We are thrilled to introduce Owen Kelly, Director of Engagement at The University of Edinburgh Business School, to Edinburgh’s Education Sector as part of VisitScotland’s campaign, Legends.

Owen Kelly holds an honours degree in Chinese and a Diploma in Social and Public Policy and is now an influential figure in Undergraduate and Postgraduate teaching. Prior to a career in education, Kelly gained extensive experience working in government and the private sector as a Civil Servant and Chief Executive of Scottish Financial Enterprise.

Tell us about your own education journey and explain how you got to where you are today.

My secondary school was one of the last state schools in England to teach Latin and Ancient Greek to ‘A’ level and studying them was rewarding in countless ways.

But when I went to University in the early 1980s I wanted to learn a living language and chose Chinese at the University of Edinburgh, one of a handful of universities to offer it at that time. It may be hard to believe but – not so long ago – most people laughed when I told them I was learning Chinese. It was seen as exotic and weird by many British people.

How times change. The course included a year in China, which at that time was still recovering from the turmoil of the Cultural Revolution and was politically, materially and culturally as different from the UK as anywhere on earth.

When I meet Chinese people now, who lived through that time, we immediately have a bond. In the 1990s I studied for a Postgraduate Diploma in Social Policy, also at Edinburgh, because it was relevant to my work as a civil servant. I also learned Japanese, as I was posted to Japan for a few years, working with one-to-one tutors at the University of Edinburgh and in Tokyo.

Now, I am studying for a PhD in Ancient Philosophy, partly to get back to the sheer joy of the Classics but also to see what wisdom can be applied to modern business.

Edinburgh has a huge amount to offer, from its culture and ancient cobbled closes, to its international recognition as the world’s leading festival city. It also boasts an attractive lifestyle and cost of living compared to the likes of London and Paris.

As well as a strong foundation in financial and professional services, today the city is home to a thriving entrepreneurial community. It’s now home to the largest number of $1bn dollar start-ups per capita – known as Unicorns – outside of the US.

But it’s not all tech billionaires. Edinburgh’s success as a startup hub is in large part down to a growing band of young companies, many of whom begin their journeys at university and are supported by the vast network of incubators, events, code-camps and business development agencies that have become embedded in the city.

It’s an attractive combination, which created endless opportunities for students coming here. Not only in terms of job opportunities but also through the exposure students get in class as we work to incorporate industry engagement within our courses, from guest speakers through to consultancy projects.

Is Edinburgh an inspirational place which promotes invention and discovery?

Edinburgh enjoys a rich history of innovation. Whether it be the social and economic philosophy of David Hume and Adam Smith or advances in modern medicine and science, the Scottish capital can lay claim to so many pioneering discoveries.

The University of Edinburgh itself has fostered many such inventions, from laying the foundations of antiseptic surgery, to the first cloned mammal, Dolly the sheep. During the past thirty years, major university spin-outs like Wolfson Microelectronics have blazed an international trail, paving the way for the recent success of FanDuel, PureLifi, and Two Big Ears.

Last year the Business School launched its first MSc in Entrepreneurship and Innovation, designed to equip graduates with the skills to manage innovation, and spot opportunities to pursue their entrepreneurial ambitions.

The School’s own Edinburgh Entrepreneurship Club, known as the E Club, supports an innovative network of more than 3,000 students, alumni, researchers, faculty and staff from across the university, and people from the wider community who share a common goal of fostering the entrepreneurial spirit.

Next month the School welcomes the return of Startup Festival 2018. For the third year running, this day-long festival of entrepreneurship, will feature the founders of some of the country’s most innovative companies. Through 16 free events, the festival will offer inspiration, networking, knowledge and skills to entrepreneurs, students and anyone curious about their startup potential.

Meanwhile we continue the traditional of world-leading research. The School’s Credit Research Centre is the leading international centre for the exploration and an agenda-setting forum on credit control and scoring. And we enjoy a global reputation for our work on strategic leadership, sustainability, accounting and society.

I feel they’re very important. There’s a growing sense that people are drawn to business education in particular because they see it as a route to make a difference.

Either because they want to build the skills and resources they need to drive innovation in the corporate world, or because they want to start a social enterprise or lead an NGO, for an increasing number of our students finding a fulfilling role is as important, if not more so, than maximising salary.

At the same time, employers are looking for the same skills and valuing breadth and diversity of experience, as well as soft skills.

So we’ve made significant investment in coaching students to help them identify their own development and personal goals, and in supporting them to achieve them.

Our graduates continue to find success in a broad range of careers. Whether it be working with global big-hitters like Ernst & Young, Deloitte, Google and Amazon, or third-sector organisations such as The Homeless World Cup and Taproot Foundation, or innovative start-ups such as Spoon-Fed and Speech Graphics.