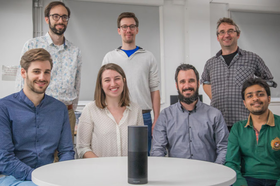 We are pleased to introduce Amanda Cercas Curry, a PhD student in Computer Science at Heriot-Watt University, to demonstrate Edinburgh’s strengths in the engineering sector as part of VisitScotland’s Legends campaign. Her engineering strengths are in robotics and she is currently leading the Alana team in the 2018 Amazon Alexa Challenge.

Please tell us about the Alexa Challenge?

The Amazon Alexa Challenge is a competition where university teams from all over the world compete to create a chatbot to converse coherently and engagingly about any number of topics, such as news, music, sports or fashion. Think of it as having a conversation with someone in a pub who happens to be completely up-to-date with the news and has read all of Wikipedia. Rather than giving Alexa commands like “play music”, you can just chat with her about recent events or a movie you watched last weekend. While this is easy for people to do, it is in fact a very hard task for AI: it is not possible to script every conversation, so we need to find smart ways to produce coherent and relevant responses, no matter what the user says.

For the second year running, our team is one of the three finalists and Amazon customers in the US are able to chat to our system as well as give a score and some feedback. We will keep working on improving the system until November, when a winner will be chosen. And the prize? $500,000 for the first place, with a possibility to win an additional $1 million dollars if the system manages to converse coherently and engagingly for over 20 minutes.

Please tell us about your day-to-day role?

I spend most of my time working on developing and improving features for Alana. We like to work together, all in one room, about once a week, which makes it easier to discuss any new feature ideas and new issues that may come up.

As team leader, I like to check conversations with our customers and look at the feedback we have received from them. This is really the best way to assess whether ,ew features are working and to understand how people interact with your bot, rather than how you expect them to interact with it. We are lucky to have access to lots of customers which really helps fine-tune the system and find new ways to delight them.

What have you learned from last year’s competition?

Last year was the first time our research group built a system of this kind, although we have years of experience in Natural Language Processing and building dialogue system for specific tasks. It was a very exciting project to take on and we were happy to see that our group’s expertise translated well to general dialogue. A big thing we learnt is that people will always find ways to surprise you. Early on in the project, we imagined what we thought would be an ideal conversation with the system but when the system went live, we found that people had extremely different expectations. For example, we imagined long conversations about politics - keep in mind this was in the midst of the 2016 US elections - but people were understandably weary of answering questions about their political preferences given growing concerns about privacy and big tech companies. This made us much more aware in of people’s privacy concerns going forward and we now generally avoid asking the user personal information or allow them the option to avoid giving any sensitive information such as their name.

What improvements have you made this year?

This year we focused on improving the chitchat aspect of our bot. We were able to build on our bot from last year, which was already good at sourcing information from newspapers, Wikipedia and the likes, but fell flat when asked about recent movies or popular books. We also extended the system to be able to link related concepts, like similar movies or actors, in a way that allows the user to discover new things based on their preferences and offering users a new way to surf the web through voice interaction.

What is the importance of robotic engineering?

Conversational AI is taking off and it is increasingly embedded in every new system from smart watches to laptops to robots. For example, Pepper the humanoid robot is already deployed in stores in Japan and uses spoken language to communicate with customers in need of help with their shopping. Pepper was even deployed for an experiment at a supermarket right here in Edinburgh, as part of another project from our research group and it included a modified version of Alana, our chatbot. We can expect to see an increase in the number of robots we come across in our daily activities and the way we communicate with them is crucial to their success with the general public. Speech is the most natural way for humans to communicate so conversational AI will be key in making robots accessible to everyone.