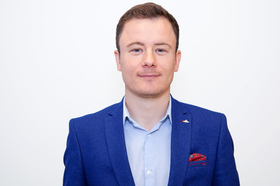 We are delighted to introduce Skyrora, an innovative space technology company based in Edinburgh. As part of VisitScotland’s Legends campaign, we spoke to Skyrora’s Director of Business Development, Daniel Smith, to tell us more about the science and engineering behind Skyrora as well as the company’s ambitions.

Founded in 2017, Skyrora is an aerospace engineering organisation with its Headquarters in Edinburgh. Please tell us more about Skyrora and what the team is currently working on?

Skyrora was founded to contribute to the UK's plans to capture more of the global space market. It's no secret now that there will be at least one spaceport built in the north of Scotland soon, and the UK is already a leading manufacturer of small satellites. We could see that there was a gap in the market for a launch vehicle that was tailored to fit the specific challenges of launching from Scotland, so we set out to design one based on existing technology, with a little modern magic thrown in!

During the early stages of the company we realised that there were a number of further gaps and opportunities in the supply chain for the UK's space sector. Consequently, we decided to set up a special unit to develop products and services that can directly support our core objectives, but also be offered to the wider aerospace industry. We believe that in order to make the UK space sector sustainable for the long-term, it's important to look forward and think about the innovations of the future, not just the present.

We're now at the point where we have a fully developed vision for reinforcing the sector, both through launching satellites and the provision of certain cutting edge supply chain initiatives.

Please tell us about your day-to-day role ?

My daily routine involves driving forward our main priorities, which at this moment includes finalising preparations to allow our engineers to conduct the launch vehicle's upper stage engine tests down south, as well as looking for suitable locations to set up a facility to test our larger engines closer to home.

At the start of the week I tend to check who I'll be meeting with during the week ahead (I travel a lot!) and work through my “to do” list, whereas towards the end of the week I'll speak with the different teams (engineers, business development, supply chain, etc.) about their progress in certain areas.

No day is the same because of the pace that we work at and the industry we're in, so in order to stay flexible I tend to delegate a lot of tasks. We've now grown to the point where I can rely on our strong team for support, and we're looking forward to adding more talent to the group in the near future! It's an exciting time!

Please tell us about the engineering behind your launch vehicle technology?

Skyrora uses proven technology as the basis for our launch vehicles, very similar to that of Britain's 'Black Arrow' rocket from back in the 60s and 70s. Our propellant is a mixture of Hydrogen Peroxide and Kerosene (we are in the process of developing a substitute for the latter named Ecosene, which is fully derived from unrecyclable plastics). This combination is ideal for UK launch in particular, because it's storable for long periods without the need for de-tanking or re-fueling that can come with using other oxidisers, such as liquid oxygen. I know it's always sunny in Scotland (!), but in the rare case of bad weather, we can wait on the pad for a launch window to arrive!

For our engines, we turn to more modern methods of manufacture, such as 3D printing and additive technologies, in order to drive cost down and increase efficiency levels. We take a step-by-step approach to our development, testing and de-risking as we move through an initial sub-orbital launch programme that is already underway.

The UK first launched a satellite in 1971 and we don't see the need to re-invent the wheel in order to do the same on a consistent basis. The key for us is to move fast but test as we go for safety and reliability, and utilise modern engineering advances - where it makes sense to do so - in order to streamline the process for long-term mass-production.

What are the future ambitions of Skyrora?

To be the primary launch vehicle for sending small satellites into orbit through regular launches from “up north”. As part of that, we intend to bring new innovations to the supply chain through our Enabling Technologies team.

We believe our responsive and dedicated launch solution is ideal for the UK and that we're well placed for success due to our careful approach and proven technology.

How do you inspire and engage the future generation of science engineers?

As a 'space' company we feel a strong responsibility to inspire the next generations. It's both a challenge and a privilege, and very much a company value that we try to instill in our staff from the moment they come on-board. At the moment we have three STEM ambassadors in the team, who attend events, give talks and dedicate time every month to finding ways to promote STEM subjects to young people.

We also practice what we preach – in the last few months, we've hired four new graduates and an intern, including two young female engineers. We're extremely proud of the diversity that exists within our group and truly believe that if we are to achieve our ambitious aims, our mixture of backgrounds will be a crucial factor.

What made Edinburgh the ideal location for the Headquarters of Skyrora?

Our CEO moved to Edinburgh over ten years ago and fell in love with the city. Personally, I was living overseas when the opportunity to help grow Skyrora came along, but when he asked me whether I'd consider returning home to help him out, it was an easy decision!

Aside from the sentimental, aesthetic stuff that makes Edinburgh right for us, there are plenty of sensible, practical reasons, too! In Edinburgh we have access to dynamic, enthusiastic talent from a number of universities and we're also close to the best launch locations, while still being linked to a full spectrum of supply chain companies via the train station and international airport.

Edinburgh is a beautiful, historic city but it's also a forward-thinking technology hub. The number of space companies here is growing, too. Being based in this amazing city lets us take an active part in shaping Scotland's role in the commercial space sector because, whether we realise it or not yet, geography and political will has dictated that our country is now very much a space nation! For a dynamic and agile British launch company such as ours...Edinburgh is quite simply the place to be.

To find out more about Skyrora, please visit https://www.skyrora.com/.