“Iconic, historic and dynamic, Scotland’s Forth Bridges are a wonder of the modern world. Towering side by side over the Firth of Forth, these structures represent the pinnacle of engineering from three centuries.”

The Forth Bridges represent centuries of engineering innovation. The three bridges stand side-by-side on the Firth of Forth and are world-renowned engineering icons. As part of VisitScotland’s Legends campaign, focusing on the engineering sector, we are delighted to feature one of Edinburgh’s greatest engineering feats; the Forth Bridge, a marvel of Victorian engineering. 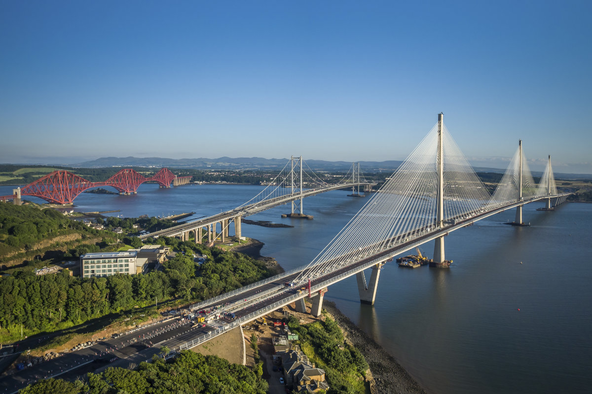 The three Forth Bridges, comprising the Forth Bridge which opened in the 19th century, the Forth Road Bridge opening in the 20th century and lastly, the Queensferry Crossing which opened just last year, are iconic landmarks; both collectively and in their own right. Connecting Edinburgh to Fife, The Forth Bridges represent some of the world’s most significant engineering feats.

We feature one of the world’s greatest engineering achievements as part of VisitScotland’s Legends campaign, the Forth Bridge. Let us take you 135 years into the past to the year construction on the Forth Bridge commenced; 1883. 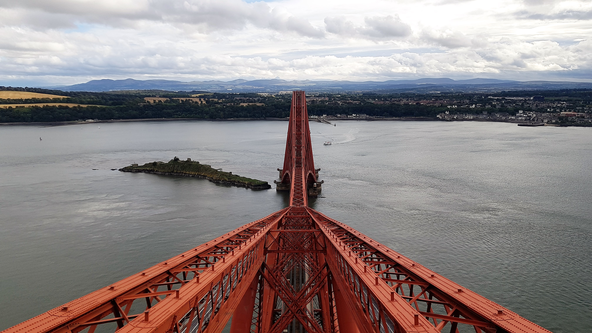 “To understand the bridge, we need to go back in time to the 1880’s, to an age when there were no computers, internet, GPS positioning, mobile phones, walkie-talkies or computer-aided design. They did have machines to help them, but most of the work was very manual.” – Frank Hay, the Briggers.

Today, the Briggers are a group of people who give the Forth Bridge a voice. They do extensive research to enable them to tell the story of the thousands of men who built the bridge. Frank Hay is a member of the Briggers; he has a particular interest in the engineering aspects of the bridge, the medical conditions experienced by the workforce and the maritime history of the Forth.

Frank, the workers on the bridge were known as Briggers. Who were the Briggers and what were their roles?

Westhofen, an engineer working for William Arrol, described the Briggers as, “Scotch, English and Irish were equally represented as to number”. The only record we have of the workforce is the seventy-three men and boys who died constructing the bridge – the youngest thirteen and the oldest sixty-one.

One of the most important roles was riveting and experienced men were brought from the Clyde and Leith shipyards. Other roles covered the many tasks involved in Victorian bridge construction such as riggers, crane operators, masons, joiners, electricians, pneumatic and hydraulic technicians, and general labourers, to name a few. Divers played an important part in building the foundations and a specialist team was brought over from the Continent to excavate six caisson foundations, “mainly North Italians, with a sprinkling of French, Belgians, Austrians and Germans”

What were the main challenges the Briggers had to overcome during the construction of the bridge?

The sheer size of the bridge and its two world record spans of 1710 ft. - the previous longest span in Britain was on the Britannia Bridge at 460 ft. Working at heights up to 360 ft., the man-handling of huge 16 ft. steel plates, Scottish weather, long hours, night shifts, lack of local accommodation, and an almost complete lack of health and safety procedures and equipment (by today’s standards). There were also strikes and drink was a problem.

Construction of the bridge started in 1883, taking seven years to complete. The design is a Cantilever and Central Girder Bridge – a cantilever is a beam or girder which is supported at only one end. The design of the Forth Rail Bridge is iconic and is recognised the world over as the most famous of cantilever designs, still holding the record as the world’s longest cantilever bridge at an impressive 2,467 metres.

The cantilever concept is demonstrated in this image from 1887: 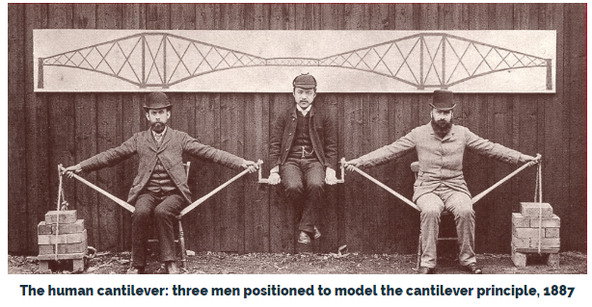 The Human Cantilever demonstration was created by Benjamin Baker to explain how the Forth Bridge’s structure works. The gentleman in the middle is Kaichi Watanabe, one of the first Japanese engineers to study in the UK. He worked on the Forth Bridge with Baker and Fowler and then returned to Japan to have a very successful career as chief engineer and then president of many engineering companies.

Seven years and 6.5 million rivets later, the bridge was complete. The first train crossed the bridge on 24 January 1890 and was driven by a female driver, Candida Louise Hay, who was the wife of the Chairman of the North British Railway.

The Briggers are the voice of the Forth Bridge, telling the story of the men and boys who built the bridge. Frank, what is your role and what makes the bridge so important to you?

Initially, our role was to identify the names of those who died building the bridge. There was a memorial to the Forth Road Bridge deaths but not one for the Forth Bridge. This took many years by our small team of local historians and genealogists and during this period we acquired a considerable knowledge of the bridge, its construction, and the social history of that period.

Anyone who works on the bridge or researches the bridge becomes captivated by the daring of its designers and the massive human endeavour of its construction and maintenance.

What is needed now is a visitor centre that tells the wonderful story of this World Heritage iconic structure and a Forth Bridge Walk that will rival Sydney Harbour Bridge.

Almost 130 years after the first train crossed the bridge, the Forth Bridge continues to be a vital transport infrastructure as 200 trains cross the forth every day, carrying 3 million passengers each year. The Forth Bridge has a long and distinguished history; it is a Scottish landmark and a world-renowned engineering achievement. The Forth Bridge, and the two bridges that now stand alongside it, represent engineering excellence and three centuries of renowned bridge design. We spoke to John Andrew who has worked in several roles at the Forth Bridge and is still very much involved today.

John, can you please tell us in your own words, what makes the Forth Rail Bridge such an iconic engineering achievement?

The Forth Bridge was the first major bridge constructed of steel and is the largest cantilever bridge in the world. It remains fully operational carrying over 200 trains a day, is a key component in the national rail network and is still doing what it was designed to do nearly 129 years since it was completed. When it was built it required significant innovative techniques and pioneered many that are still in use today. It remains a worldwide icon of Scottish engineering excellence and an outstanding example of railway engineering at its best.

In July 2015, UNESCO inscribed the Forth Bridge as the sixth World Heritage site in Scotland, 125 years after the official opening of the bridge. What does this mean for Scotland’s engineering sector?

The inscription of the Forth Bridge as Scotland's sixth UNESCO World Heritage Site is a significant accolade for Scotland's engineering sector and is the first civil engineering project to have received such recognition. To have the Forth Bridge included alongside other world renowned iconic sites provides a strong recognition of the role Scottish civil engineering has provided not only at home but around the world.
Sitting alongside the Forth Road Bridge and Queensferry Crossing, the three Forth Bridges provide a unique statement on the value and role civil engineers have provided and continue to provide to society. This message should also be used to inspire future generations of crucial role that civil engineers play in the development of modern life.