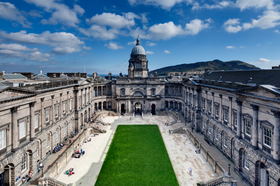 You are Professor of Synthetic Biological Engineering, Head of Institute for Bioengineering and Depute Director, UK Centre for Mammalian Synthetic Biology, at the University of Edinburgh. Please tell us about your day-to-day role.

My role is really varied – that’s a key attraction of the job. In our research we have the freedom to explore widely. If you said to a younger version of me that I’d be doing research to genetically reprogramme cells with the ambition to use them as biological robots to treat disease and injury, I’d have been more than a little skeptical. But that’s a major direction for my research group at present, along with developing technologies to track and control these ‘biobots’. We also look at new diagnostic instruments for measuring biological samples, with aims such as the characterization of diseases.

I started my career as a mechanical engineer and quickly became captivated by biomedical applications. My PhD was in the lubrication and wear of artificial hip replacements and since then I’ve become steadily more “bio”. I was lucky enough to be an early adopter of, and then advocate for, “synthetic biology” which is actually engineering applied to biological systems. I’ve now become a programmer of sorts; my software I write in DNA and the computer that runs this software is a cell. The University has been great in its support of our efforts to develop this research and we can confidently assert that Edinburgh is now a globally-leading location for this kind of work. Edinburgh, and Scotland, is in a great position to benefit from this technology and I’m excited to be able to play a part in that.

As the Head of the Institute for Bioengineering, I’m responsible for the group of academics within the School of Engineering who work on biomedical engineering and biotechnologies. They’re a pretty good bunch so it’s a real pleasure to help them to refine their ideas and research directions. I’m constantly learning from them and hopefully they’re picking up some good habits from me…

What are the main strengths and expertise of the University’s Institute of Bioengineering?

The Institute has a pretty broad spectrum of interests, from orthopaedics to biofuels, but there are two main areas of focus. We have a cluster of young biological engineers – I’m in my mid-forties but probably have 10 years on the eldest of them… My real problem is then how to make sure they are all enabled to make the most of their abilities - keeping up with them in terms of the infrastructure and support that they need to be able to be successful. Our other strand of expertise is in developing sensor technologies, small devices which can be implanted next to an area of disease, or embedded into a wound dressing, and then report on the conditions there. This could help clinicians to understand how effective a drug is being, or how well a wound is healing.

What research projects are you working on at the moment?

Besides my work in biological engineering I do keep my hand in with more conventional “engineering” projects. One I am especially keen on aims to design and prototype a low-cost incubator for use in the global south. Infertility is a challenge that affects about 1 in 10 couples globally but only 1 in 10,000 of these have access to assisted reproductive technologies. In many countries there remains huge stigma associated with being childless. After the sperm and egg have been brought together in the lab they are usually incubated in the lab for up to 5 days before being placed back into the mother’s womb. Working in collaboration with IVF specialists in Edinburgh, Chile and South Africa we are developing a low-cost incubator which is optimised for use in these areas. We intend it to perform without compromise and generate time-lapse images of the growing ball of cells for the embryologist.

The University of Edinburgh is celebrating 150 years of engineering innovation this year. In your opinion, what have been most notable successes so far?

Over 150 years of Engineering at Edinburgh has delivered a vast array of technologies that have had impact on industry and society across the globe; from foundational work like that of William Rankine on thermodynamics, to the pioneering work of Stephen Salter in marine renewable energy. I think the most iconic for me are the lighthouses of the Stevenson family, three generations of Edinburgh taught engineers, who created what were at the time cutting-edge, life-saving technologies. Their structures may now be essentially obsolescent but they stand unperturbed by the passage of time, punctuating the dramatic beauty of Scotland’s coastline.

But I actually think our most notable success is not an innovation or technology; it’s the thousands of engineers we’ve graduated. They have gone out into the world, become leaders in their fields, contributed not just to their companies but their communities too. These alumni are the most powerful articulation of Edinburgh’s reach out into the world.

Have you ever brought a conference to Edinburgh? If so, please provide details.

I’ve been part of the organizing team for a few conferences in Edinburgh, like the 2010 European Society for Biomechanics meeting and the 2016 Synthetic Yeast Sc2.0 meeting. It’s great to be able to bring people to Edinburgh and share my home with them.