Working in Edinburgh to break the link between mental health and smoking.

It is a sad fact that people with mental health issues die on average 10-20 years earlier than the general population. Yet too few people know that smoking is the single biggest contributor to the physical health problems and high mortality affecting this group.

The physical harms from smoking – such as greatly increased risk of cancer, heart disease, dementia and stroke – are not the only consideration. On top of that the economic impact on people with mental health issues is substantial – with the cost to each smoker averaging over £130 a month, or £1600 a year. Those buying a packet a day from a shop will lose well over £3000 a year to their addiction.

Crucially we now know that smoking is also harmful to mental health, and that people who stop smoking report that they are happier afterwards, and show improvements in conditions such as depression, stress and anxiety.

It is not surprising that, in surveys, most people who smoke say that they regret starting and would like to stop. But tobacco is as addictive as heroin, and the idea of smoking as a coping mechanism is so deeply entrenched amongst people with mental health issues that it is proving difficult to shift. 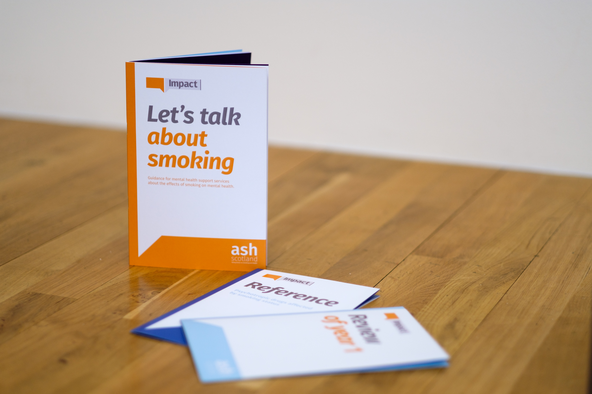 ASH Scotland’s IMPACT project sets out to do just that.

Developed in consultation with staff and service users across Edinburgh and the Lothians, the IMPACT project exists to support workers and volunteers, enabling them to be more confident when supporting clients to consider the mental and physical health benefits of stopping smoking.

One of our most potent arguments is that we have found most people to be unaware of how smoking impacts on medications, including those for mental ill health such as anti-depressants. Because the impact of tobacco smoke is to increase the rate at which the body breaks down the medication, higher doses are needed in order to have the same effect. This not only increases costs for the NHS, but also causes greater experience of side-affects amongst patients.

Highlighting this link, along with the crucial fact that most people who smoke want to stop, has been central to convincing people that smoking is part of the problems faced by people with mental health issues, rather than a support. Even so, many professionals still report that they find it difficult to discuss smoking with clients, due to concerns over appearing judgemental or controlling, of feel that this further disempowers clients through taking away a perceived coping mechanism.

To foster an approach which unmistakeably centers on empathy, help and support to those who wish it, we have developed the AID framework – where professionals will ASK a client how they feel about their smoking, INFORM them of the impact of smoking on mental and physical health and DISCUSS any actions the client would like to take, or support that they can be offered.

We have now trained nearly 400 staff across Scotland, who together work with around 5,000 people each year, working in both NHS and community-based services. In addition to this free training, our “Let’s talk about smoking” guidance and materials are free to any professionals working to support people with mental health issues, and can be downloaded from the project website: www.impact.scot

Convention Edinburgh, part of Marketing Edinburgh, is charged with promoting the city as a destination for business events. We seek to engage with our key sectors to facilitate and encourage these gatherings, which ultimately result in a thriving knowledge economy. For more information on organising a conference or meeting in Edinburgh, check out http://www.makeitedinburgh.com