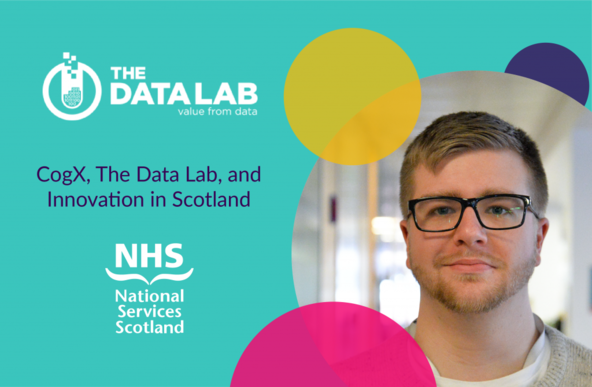 CogX, The Data Lab, and Innovation in Scotland

It’s 9am in London, I’m half-dressed in a suit, smell like an accident in an aftershave factory while nursing a coffee and getting ready to speak on a panel. The conference is Cognition X’s excellent CogX conference where most people have more letters in their titles than I have in my full name – no pressure.

I’m at the conference because The Data Lab and I are working on the NHS NSS’s Synthetic Medical Data project and the panel is about data related medical innovation. I finish waffling on the panel and start talking with people. There’s really only one way to sum up what almost every person said:

“Scotland is leading the way with technology, making it a great place to do business and pursue innovation”

Rather than simply agreeing and saying because it’s an amazing place (even though it’s true!), there are some really interesting aspects to this statement.

Scotland has consistently been at the front of science and discovery, especially since the Scottish Enlightenment. As such it has excellent world class universities and research centres. What seems to really encourage innovation is, however, the fact that these institutions closely work with industry.
The praise from industry people was around the fact that universities not only provided knowledge support but also offered business support.

Traditionally this was in areas like engineering and the oil industry but this has now expanded drastically. Most Scottish universities now have explicit policies and entire teams designed to support close industry collaboration and foster spin-out companies.

One of the best examples of academia and industry partnership is the University of Edinburgh based EPCC facility. The EPCC was grown from the parallel computing department to become an independent supercomputing centre of excellence with its Archer supercomputer. What makes the facility special is the fact that it runs both academic and industry projects.

EPCC staff are, therefore, well versed in both the technological aspects of projects as well as the different business needs of academic and industry projects. What this means in practical terms for your business is that you can be guided through your project using exceptionally powerful machines without having to purchase all the equipment just to test an idea. The close links with the university means that if you have a question about your project then there is always the opportunity to be signposted or network with world class experts.

You can’t mention academic support and industry in Scotland without mentioning The Data Lab. The few people that hadn’t heard of it at the conference were surprised that such a thing exists, mainly because it’s such a simple idea but facilitates so much. The key idea is that industry has a clear need for innovation but can’t afford millions to constantly hire data experts and create full R&D departments – especially so if they’re in the public sector or an SME!

The Data Lab matches the support a business needs whether it’s training, business support or even on-site data scientists backed with world class academic support. This means that whether you need some advice or more direct support for your business then this can be done! Also, they’re based throughout Scotland so whether you like the hills of the Highlands or a good coffee in the city, they’ll be there.

Business Support of All Sizes

Edinburgh is recognised as one of the most important financial centres in the UK. Walk around the city (or Glasgow) and you’ll see massive offices of multi-national banks, energy suppliers, finance/insurance companies and technology companies – including a slightly known games developer in the form of Rockstar. Go to the North of Scotland and you’ll find huge oil companies both extracting it and researching alternatives. So there’s clearly huge interest for investing in and support to move to Scotland for large businesses.

What about Small and Medium sized Enterprises (SME’s) and Entrepreneurs? Almost all aspects of support from financial to technical are supported in Scotland!

Scottish Development International is designed to help businesses find the right opportunities and financial help to invest in Scotland. In a similar vein, Code Base is a tech company incubator that fosters small tech companies. They accomplish this by having affordable quality offices while offering networking with the other companies and the universities in Edinburgh. Again, if you need advice on anything in this area, contact The Data Lab as they like people – unlike me.

Perhaps the greatest interest to anyone in industry or academia is the Scottish Government’s Regional and City Deals. Each area of Scotland will receive various funding packages that target strengths and weaknesses in each area. For example, Edinburgh is investing £60 million in data innovation projects alone, while Glasgow is investing several million in improved infrastructure and medical innovation. These are designed to encourage industry and academic projects of all sizes, so go looking as whether you need £5 or £5 million in investment, Scotland is a great place to foster and develop innovative solutions!

While Scotland is leading the way in innovation, it also wants to do it in a way that actually benefits everyone. People at the conference remarked that Scotland was able to balance supporting technology and industry while also ensuring equality in outcomes for its citizens.

It’s a difficult concept to point to as it is more of a guiding set of principles than formal steps. I could list myriad examples of technology like facial recognition going very wrong and being used in an inaccurate and unethical way but I don’t wish to be negative. Instead I shall simply highlight a project whereby industry, the public sector and other parties delivered great outcomes using data in a safe and ethical way.

A great example of this is the FIT Housing Initiative, where homes are fitted with a state-of-the-art sensor packages. Rather than simply being a data gathering exercise the information is processed in conjunction with experts from The Data Lab and Robert Gordon University to help adults with disabilities and their families enjoy independent safe living. This means a person in the project can consent to share their data with their family only or have it processed to ensure, for example, that they are drinking enough water.

If you need more guidance or confidence in the matter simply look up any of the public bodies, official legislation or governmental strategies. All of them have at their core that any innovation should be supported but that it must benefit all citizens of Scotland – An AI’s an AI for A’ that.

The views in this blog are expressly the authors own and do not represent the views of the National Health Service National Services Scotland (NHS NSS) or any related organisations.

Content provided by the The Data Lab. Original source can be found here.

Convention Edinburgh, part of Marketing Edinburgh, is charged with promoting the city as a destination for business events. We seek to engage with our key sectors to facilitate and encourage these gatherings, which ultimately result in a thriving knowledge economy. For more information on organising a conference or meeting in Edinburgh, check out http://www.makeitedinburgh.com