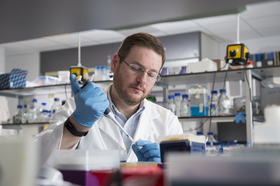 Edinburgh Napier’s School of Applied Sciences goes beyond learning. It puts theory into practice and uses science to help make a difference.

Focused on subjects such as life sciences, psychology, social sciences and sport, exercise and health sciences, its offering is diverse and varied. However, despite this, the School is underpinned by one key theme across both its teaching and its research activity – using science to solve world and societal problems. Across the School, academics are continuing to work on pioneering research projects, which aim to do just this. A strong emphasis is placed on human health, with a number of the projects aiming to make breakthroughs in many of the illnesses and conditions that affect people on a daily basis.

Last year, he oversaw an important breakthrough in the cure for the common cold after uncovering exciting new possibilities for treatments based on ‘antimicrobial peptides’. These peptides occur naturally in humans and animals, and increase in response to infection. The breakthrough received extensive media coverage from throughout the world.

Despite being in its infancy, the School has – and will continue to – work together to find solutions and make positive change to conditions, disease and illnesses that impact upon human health throughout the world.

And they will do so from the heart of Scotland’s capital city – Edinburgh.

Professor Thanos Karatzias, Professor of Mental Health and Director of Research for the School of Health and Social Care at Edinburgh Napier University discusses his experience of working in Edinburgh’s life sciences sector.

Can you tell us a little bit about your career so far?

I am a clinical psychologist by trade. My career has been here in Scotland. I am not a Scot but I am an adopted Scot – that is how I would describe myself being here for almost most of my life. I did my first degree back in Greece and then I moved to Scotland. All my postgraduate education including MSc, PhD and my clinical training was done here in this country.

I have very special interest in psychological trauma. I have done quite a lot of work on how people have been affected by traumatic life events – both in childhood and adulthood. From road traffic accidents, natural disasters, combat stress or even childhood trauma of different kinds. Quite a lot of my work has been on the impact that these sort of events have on health and wellbeing and how we can use talking and psychological therapies to alleviate psychological distress.

Most recently, I have been very fortunate to be involved in the origins and development of a new condition – Complex PTSD. This is now a new classification in the international classification system of diseases. It is a major breakthrough as it now gives us an avenue to start exploring means of helping a population group with more complex requirements.

How did you end up in Edinburgh?

Edinburgh came later for me. I came over from Greece to Stirling to do a course in psychology and health - health psychology was not established in general psychology back then. That tells you how long ago I was studying! I did my MSc and PhD in Stirling, qualifying as a health psychologist.

The reason I came to Edinburgh was that I really fell in love with the city – and I am still in love with it now. It is one of the most fantastic places to live – it is beautiful, it is multicultural, there is a buzz, there is energy. I think it is my favourite place.

The reason I came from Stirling to Edinburgh was a job at Queen Margaret University. After that, an opportunity came up at Edinburgh Napier and for the last 15 years, I have been here. I joined as a lecturer, then I worked up to professorial level and now I have my personal chair. I am also the director of research for the School of Health and Social Care.

What are the research themes within Edinburgh Napier’s School of Health and Social Care?

The research themes for the School is Mental Health, Cardiovascular Health, Population and Publish Health, Women, Children and Families and Innovation for Practice. Health and wellbeing is very much at the heart of everything we are doing here. We have a number of different streams - from cardiovascular health and cancer care to public health, mental health and trauma. I would say all our research in these areas are of international standing. They are very successful programmes of work, which we continue to develop by the day. It is a very exciting community of researchers.

How did your interest/work in Complex PTSD arise?

My interest in that was clinical. I am affiliated with the Rivers Centre of Traumatic Distress at NHS Lothian where I practice as a clinician. What became quite apparent was that a typical PTSD diagnosis did not fit the population that we tended to see. There were certain symptoms that people described and they were quite distressing for them.

We have just completed the first study in the world on Complex PTSD using a standardised new tool and we have found evidence of Complex PTSD here in Edinburgh. We found that in most of our cases, 76% of that sample were complex, compared to 24% that were simpler cases of PTSD.

Research on trauma is one of those areas that has seen significant growth in the last 20 to 30 years. The more we learn, the more we respond to the needs of the population. This was really the thinking that underpinned my research into Complex PTSD.

I think what has been fantastic here in Scotland is that there has been quite a lot of support from the Scottish Government for mental health. For example, we were one of the first countries in the world that had a dedicated strategy for survivors of childhood trauma. That is very unique and very forward-thinking.

Why do you do what you do?

For me, I don’t know whether this was how I was raised or not, but I just had this kind of idea that I wanted to leave the world in a better place from how I found it. I think I am very lucky to work in an area that is relevant to the vast majority of the population. The work we are doing has the potential to improve peoples’ lives. Some of these procedures are very difficult for people. Mental health is not easy. As you know, traditionally, the focus of our systems and how we think about health is physical, but mental health is a big component. Both are combined; if you have poor mental health, then you get poor physical health. They aren’t always linked, but it does regularly occur. And the other way around.

My team and I are focused on playing our part in developing new interventions for new conditions. We want to help support certain populations overcome more complex forms of traumatisation – and we look forward to continuing to do this in the months and years ahead.