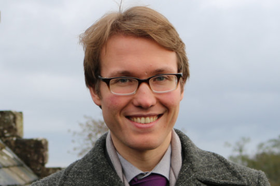 Matjaz Vidmar, Convention Edinburgh Ambassador, is a postgraduate research student at The Institute for the Study of Science, Technology and Innovation at The University of Edinburgh. Based at The Royal Observatory Edinburgh, Matjaz’s work is closely linked to projects run by The Institute for Astronomy and STFC - Science and Technology Facilities Council's UK Astronomy Technology Centre (ATC).

Edinburgh’s rich history of scientific and technological development is a great stepping stone to unlock future potential. From famous centres of research, such as the now re-opened City Observatory on Calton Hill, to locations connected to leading people, like the office of Nobel-prize winner Peter Higgs, and even famous attractions, such as Camera Obscura - Edinburgh is filled to the brim with historical spaces and cultural reference points. In fact, you can do several tours around the city centre to explore sites of historical significance to (to help you along, you can download the free Curious Edinburgh app).

Are there any notable historical figures in particular from Edinburgh?

Astronomy, in particular, is responsible for a rich tapestry of scientists, inventions and inspiration! In 2019, we are in an especially celebratory moon, since we mark the 200th anniversary of the birth of Charles Piazzi Smyth, a famous (and perhaps somewhat misunderstood) Victorian astronomer. A special exhibition about his life and work is currently on display at Nelson Monument, an “upturned telescope”-shaped tower designed by the architect Robert Burn, where to this day, as Piazzi Smyth set-up in 1853, every day at 1 pm exact a time ball drops from the pole at the top. An interesting curiosity these days, the time ball was of vital importance to ships in the port of Leith to adjust their clocks for navigation. Unfortunately, with the Scottish weather, the ball was not always seen, so a blast from the 1 o’clock gun from Edinburgh Castle was added in 1861 – an unmissable event if you anywhere are near Princes Street at 1 pm!

What are the major Astronomical Institutions in the city?

Home to the (Royal) Astronomical Institution since 1811, Edinburgh had its fair share in the most critical developments over the past 200 years. Now called Royal Observatory Edinburgh and located on Blackford Hill, its successor is still a major site for scientific research in all areas of Astronomy and Space Science and technological development of largest ground- and space-based telescopes. For instance, scientist and engineers here are leading the design of one of the main instruments, called MIRI, on the path-breaking James Webb Space Telescope. With the recently-opened Higgs Centre for Innovation, a joint European and UK Space Agencies’ certified entrepreneurial incubator, Edinburgh Astronomy is not only a feature of the past – it is also open to the businesses of the future.

Are there any upcoming space related events to look out for?

The inaugural Space Enlightenment Festival, amongst other things marking another 2019 anniversary – 50 years since first humans landed on the Moon. Bringing together a varied set of people and activities, we are discussing the human perspectives on these advances, for instance in our upcoming Scotland on Space science fiction and essays publication, the Visions of Scotland’s Space Exploration seminar series and Space has Landed in Scotland mini-exhibition. Not just this Summer, walking though the city at any time you are met with our rich astronomical past, present and (no doubt!) future at every step and whether you are in Edinburgh for a day or have lived here all your life - we invite you to join us on a journey to explore it!

Read more about Mat and his work.