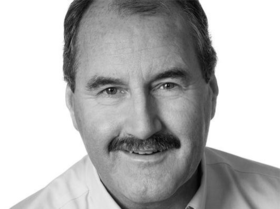 James Garden recently retired from the Regius Chair of Clinical Surgery but continues to work full time as Professor Emeritus and Dean International at the University of Edinburgh. A graduate of Edinburgh Medical School, he trained in surgery in Edinburgh, Glasgow and Paris returning to Edinburgh over 30 years ago as a specialist liver surgeon. He undertook the first successful liver transplant in Scotland in 1992, establishing his academic career within an internationally renowned clinical service. He has facilitated the development of a strong academic surgical department that is recognized for its excellence in research, surgical practice, training and education.

Having recently ‘retired’ what would you say have been your stand-out career highlights?

Spending my undergraduate medical education in Edinburgh in the 70’s is difficult to beat. I undertook most of my surgical training in the West of Scotland but my specialist training in liver surgery in Paris was a revelation in exposing me to advanced surgical techniques that were just not undertaken in the UK at that time. This allowed me to bring hepatobiliary surgery to Edinburgh in 1988. This helped me to be involved in the establishment of the Scottish Liver Transplantation Unit and to become part of the international network in the specialty. As an academic surgeon, it has been pleasing to help build a department that offers quality surgical training in HPB and transplant surgery. Our major global impact was evident when we had the opportunity last September to celebrate this with some 50 returning international fellows that we have trained over the last 30 years. That strong clinical training base has provided an outstanding environment to develop some remarkable bright young academic talent over the years. I never imagined that I would rise to the top of academic surgery in Edinburgh and be appointed to the Regius Chair of Clinical Surgery in 2000.
It was also a great honour to be appointed Surgeon to the Queen in Scotland in 2004.

In 2007, I led the development of a ground breaking online masters programme, the MSc in Surgical Sciences for the University of Edinburgh in collaboration with the Royal College of Surgeons of Edinburgh (RCSEd). The seeds for this substantial educational enterprise were actually sown at the RCSEd quincenterary celebrations! In just over 10 years, we now have some 600 training surgeons from over 40 countries enrolled in our programmes at any one time. I was fortunate enough to be awarded the University’s Chancellor’s Award for Teaching by the Duke of Edinburgh at Holyrood Palace in 2010 and the programme was awarded the Queen’s Anniversary Prize for Higher and Further Education at an investiture at Buckingham Palace in 2014. That same year I received my CBE from Her Majesty at an investiture at Holyrood Palace and can safely say that all my interactions with the Royal family have therefore been social!

Early in my career, I was made a Travelling Fellow of the James IV Association of Surgeons which was a tremendous opportunity to make use of an international network that has helped me in my building on Edinburgh’s historic reputation as a centre of medical excellence. I was recognized nationally and internationally through the Presidency of the Association of Upper GI Surgeons of Great Britain and Ireland as well as of the International Hepato Pancreatico Biliary Association (IHPBA). I am not sure if I really needed to abuse my leadership roles to entice these and other organizations to come to Edinburgh for their meetings and conferences.

Being a prolific figure in organising and bringing conferences to the city, what conferences in particular stand-out?

The RCSEd Quincentenary Congress in 2005 was a wonderful challenge! Most meetings that I have been involved with take place every one or two years but the Quincentenary Congress was the first meeting for 500 years and was not going to happen again in the lifetime for those that I persuaded to attend! The medical history and city heritage was the big attraction for the speakers and delegates, most of whom had to pay their own way! The Duke of Edinburgh and Kofi Annan, the then Secretary General, were even persuaded to participate and we enjoyed a wonderful reception at Edinburgh Castle on a balmy summer’s evening!

I was Chairman of the 7th World Congress of the International-Hepato-Pancreatico-Biliary Association (IHPBA) world congress which was held in the following year, also at the EICC, an ideal location for any big conference because of its wonderful facilities and central city location. The Princess Royal delivered a wonderful address to the international delegates, many of whom wore kilts at our black tie dinner at the National Museum of Scotland. I have enjoyed just as much delivering smaller meetings such as those of the European Surgical Association and the International Surgical Group in 2016. Adapting the generic format of an annual meeting by adding a Scottish or Edinburgh flavour to the scientific and social programmes is always great fun. I have always had wonderful support from a professional conference organiser and it is the reason I am bringing two further smaller surgical groups to Edinburgh in 2019!

Is there a particular conference you would like to see come to Edinburgh in the future and why?

I would like to see the World Congress of Surgery come to Edinburgh because the International Surgical Society is such a global presence in surgery. The past Secretary General of the Society was a very good friend of mine and actually visited Edinburgh in 2015 to see the venues that we would have used but sadly he died unexpectedly at the World Congress in that same year. Our shared enthusiasm for Edinburgh as the perfect conference destination will hopefully bring the Congress to Scotland one day.

In what areas of surgery and medicine do you think Edinburgh’s key strengths lie?

I know that I will upset some colleagues by not recognizing them or their specialty. Edinburgh has a rich history in medicine. The medical School was founded in 1726 and many of its graduates have gone on to found medical schools worldwide. Luminaries at that time included Alexander Monro Primus, the inaugural Professor of Anatomy. He and his son, Alexander Monro Secundus were part of the reason why Edinburgh became established as a global centre of training in medicine and surgery in the 18th and 19th centuries. Sir James Young Simpson discovered choloroform anaesthesia in 1847 and revolutionized obstetric and surgical practice. Sophia Jex-Blake forced Edinburgh University to become the first Medical School to admit women to study medicine in the 1870’s. In surgery, Joseph Lister, the third Regius Professor of Surgery (1896-1877) developed antiseptic surgery and established an international reputation , being followed by a number of innovative individuals who further established the global reputation of the Edinburgh School of Surgery. This continued into the 20th century and Sir Michael Woodruff, Professor of Clinical Sciences performed the first kidney transplant on the United Kingdom in 1960.

Edinburgh still has huge strengths in medicine and surgery and provides an outstanding environment to deliver outstanding training and research.

What inspired you to study and work in Edinburgh?

My father was a fellow of the Royal College of Surgeons of Edinburgh and an orthopaedic surgeon in Lanarkshire where traditionally those wishing to study medicine would go to Glasgow. I was inspired by the city and its medical heritage and thought that I had really landed on my feet by living for my first three years of student life in halls of Residence at the top of the Royal Mile, only a short walk away from the Medical School and hospital where many of the historic figures of Edinburgh medicine had also studied and practiced. As I reflect on my career in surgery over the last 30 years, I still see Edinburgh as a centre of medical and surgical excellence. It provide a fantastic environment to study medicine and is surely one of the best cities in the world to host any medical related conference!